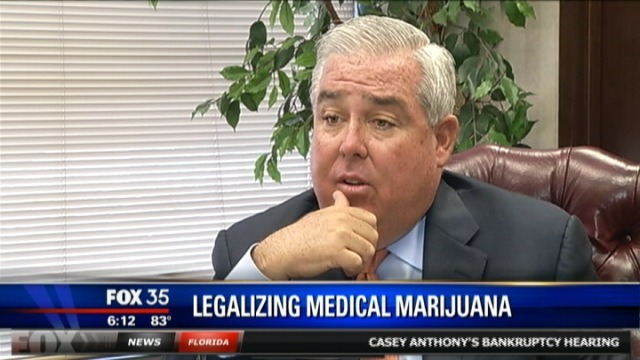 A proposed amendment that would legalize medical marijuana in Florida has become a central issue in the state this election. With voting only nineteen days away, voters have little time left to consider the issue.

In a heated Tuesday night debate, undecided voters had the opportunity to listen to the pros and cons of Amendment 2. Prominent marijuana advocate John Morgan, who also chairs United for Care, and anti-legalization critic and policy director for No on 2, Dr. Jessica Spencer, went head-to-head.

Much of the debate centered around whether the amendment would be a danger to communities and kids or help people with debilitating medical conditions.

“They’re not going to have gummy bears hanging on a rack next to a school with marijuana in it. It’s preposterous,” said Morgan. He believes that anti-marijuana advocates are using scare tactics rather than fact to strengthen their position.

“This is de facto legalization of marijuana, simply by the way they wrote it,” Spencer retorted. “If you didn’t want them near schools, and you wanted to protect our communities, you should’ve written it in there. That language actually allows for any of the symptomology associated with those conditions to qualify someone for marijuana.”

Spencer maintains that there are no proven medical benefits to cannabis use. “There’s no conclusive evidence that marijuana as an entire plant works as medicine.”

If Amendment 2 passes in Florida, it will allow patients access to medical marijuana for certain medical conditions as determined by a qualified physician. The Florida Department of Health would regulate dispensaries and issue ID cards to patients and caregivers. The list of illnesses eligible for treatment with cannabis would include glaucoma, HIV/AIDS, PTSD, ALS, Crohn’s disease, Parkinson’s disease, and multiple sclerosis.

Amendment 2 requires 60 percent of voters’ support to pass. It failed with 57 percent in 2014.